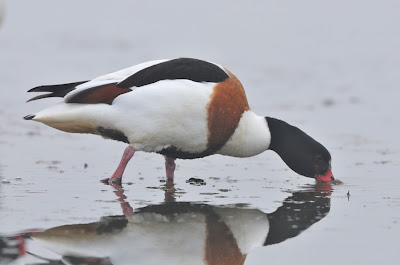 My first jaunt out for March and a foggy start to contend with. I headed off for first light (not that I was going to see it with the fog!). I sat myself up under a cammo net and waited for the skies to clear....but it never did until too late. As I sat near the shore line I could make out some waders feeding amongst the usual group of Lapwings. And one in particular stood out due to its size.

As the fog crept in and out I could see it was a Dunlin and what appeared to be the only one. It closely associated with a pair of Redshank, and moved off at times when they were disturbed. As the sun tried to break through it showed briefly slightly closer before joining the pair of Redshank as they flew off to the south. It might of returned along with the Redshank later but I was not able to stay as a visit to the vets was in order for my 'Bully'.

What was frustrating was when the pair of Shelduck ventured right in front of my position, totally oblivious to my presence and happily feeding away and too close to photograph after a couple of shots. Mind you the fog put any chance of a good pic out of the window, but good to know my fieldcraft was up to scratch.! 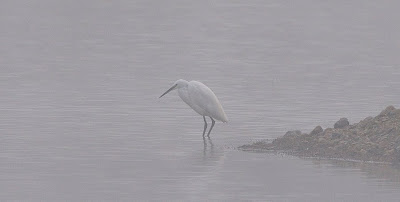