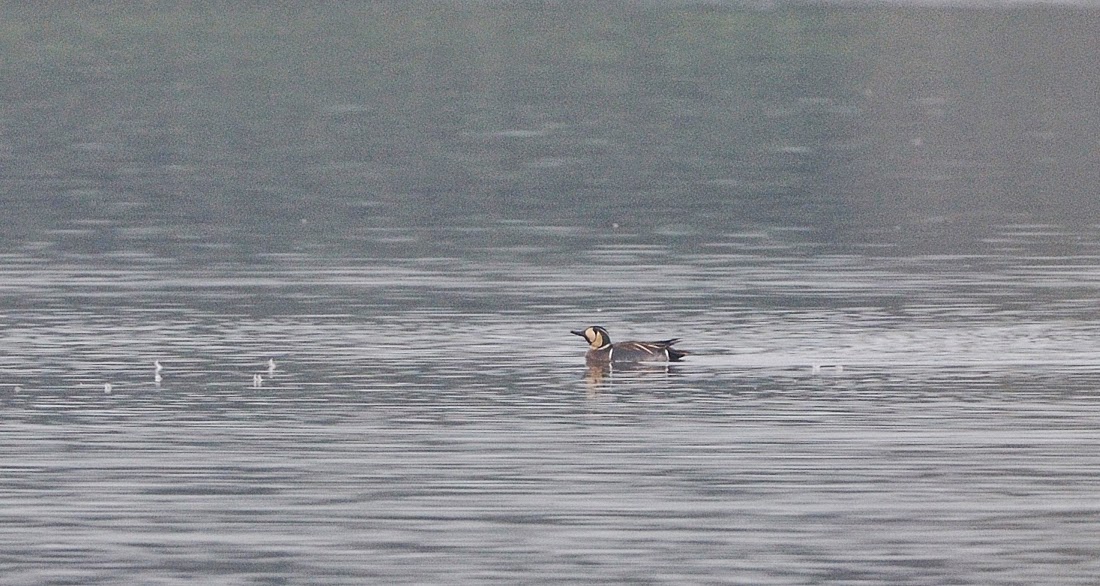 MEGA. BAIKAL TEAL.
During the last weekend of March, news of a Baikal Teal at Fen Drayton appeared. At the time I was working nights and so that made it difficult to get up there. But with news of it still being present late Sunday I decided to go straight from my last nigh-shift to Fen Drayton. I got home and with my wife Sarah awaiting my arrival, a quick scramble to get my camera gear ready and we were off. The weather was quite grey when we arrived, a low layer of cloud stopping the sun coming out, but it was dry at least, which is more than can be said of the tracks! In a couple of places it was waterlogged and muddy as hell. Still we pushed on and entered the hide, being the first ones there. 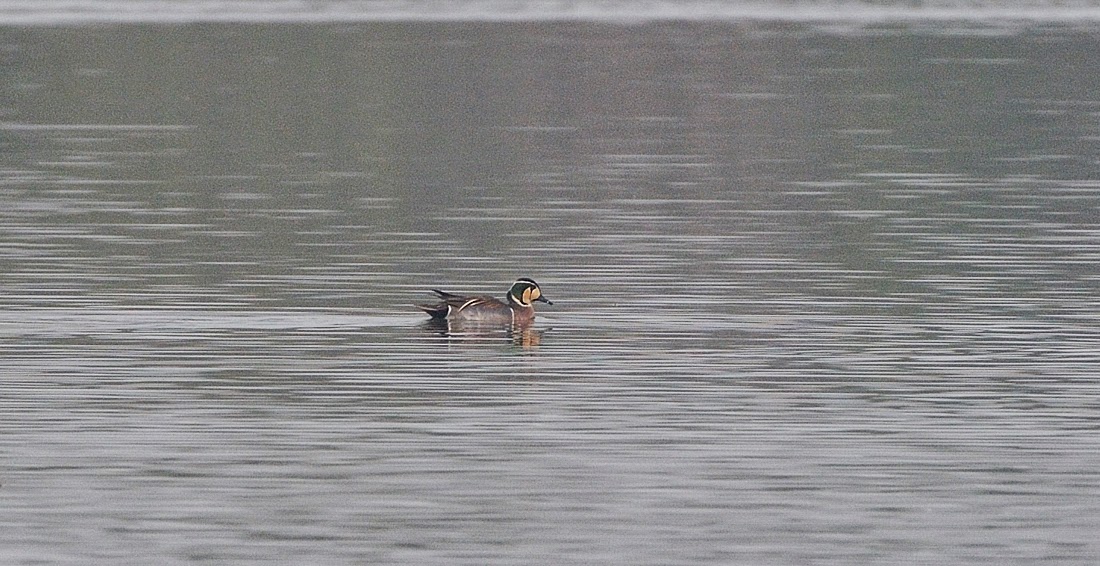 With my camera resting on the bean bag I set about scanning the lake. It wasn't long before I had picked it out, off the spit of land some distance away, but unmistakable, what a beauty even in the grey light. As birders slowly started to arrive, the bird moved up onto the bank of the spit just out of sight as it laid on the grass. Every now and again it would move it's head enabling new arrivals to glimpse this rare beauty. 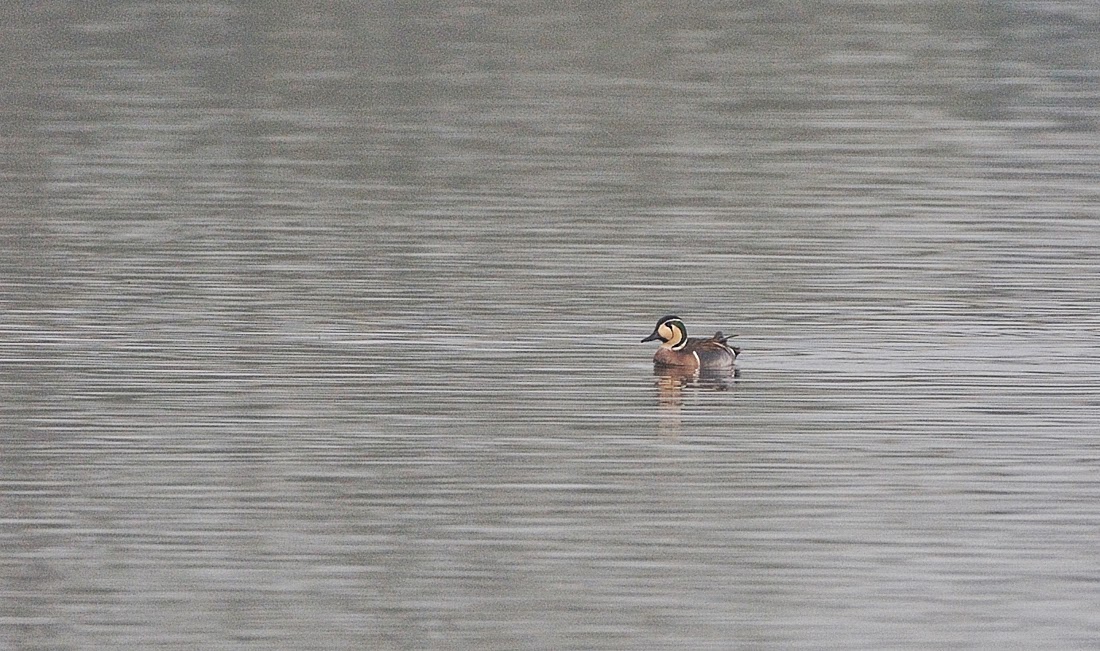 After some time it decided to move off the spit and then kept loyal to the stretch of water parallel to this point of land where it had been resting up. It never really ventured any closer, as it zig-zagged back and forth catching insects on the waters surface. It was loosely associating with the Wigeon as they also fed in the same manner, and if they were not present then it kept to itself. I had previously connected with the Baikal Teal at Minsmere some years ago, but his was a new one for Sarah. After a few hours and the likelihood of it approaching not seeming a safe bet and more birders turning up we departed. Once home I contacted my Dad and informed him of our outing, knowing that he also had not seen this species, and after a short discussion it was going to be another early departure for me the next morning. 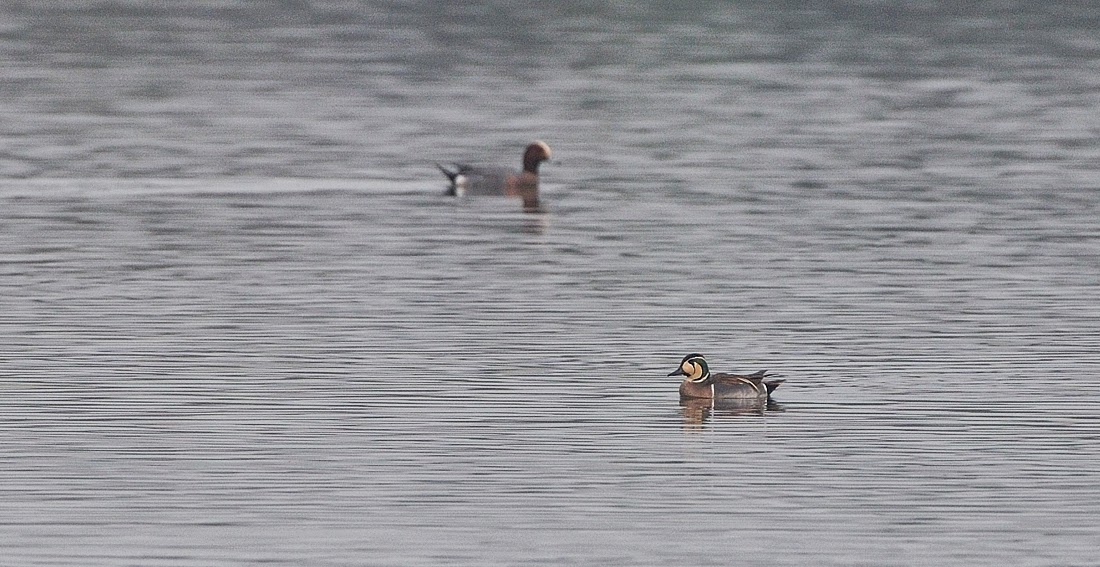 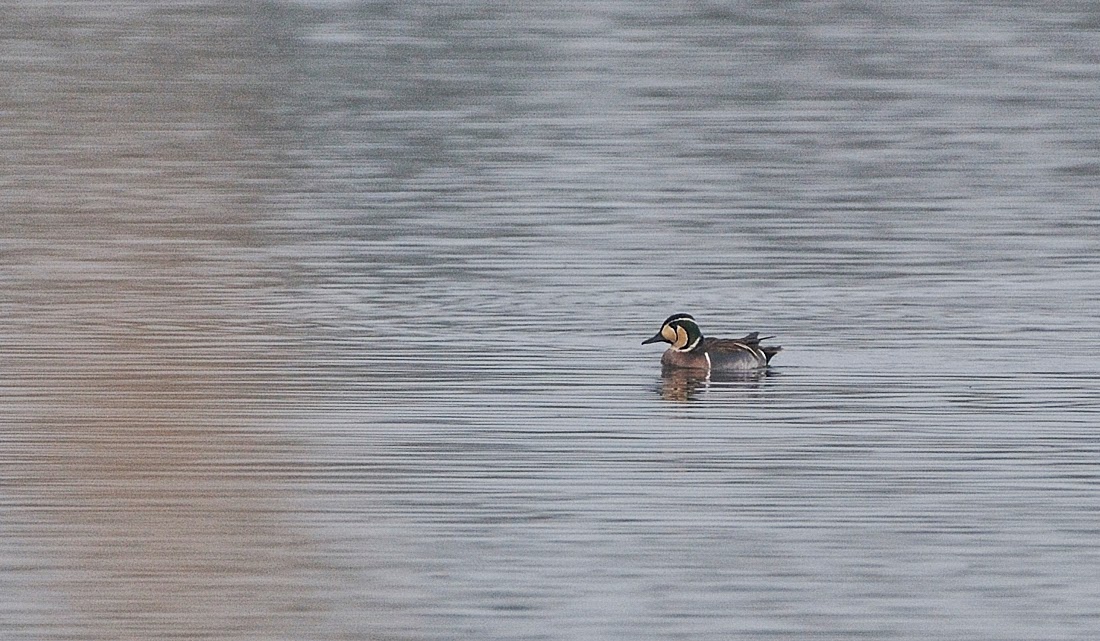 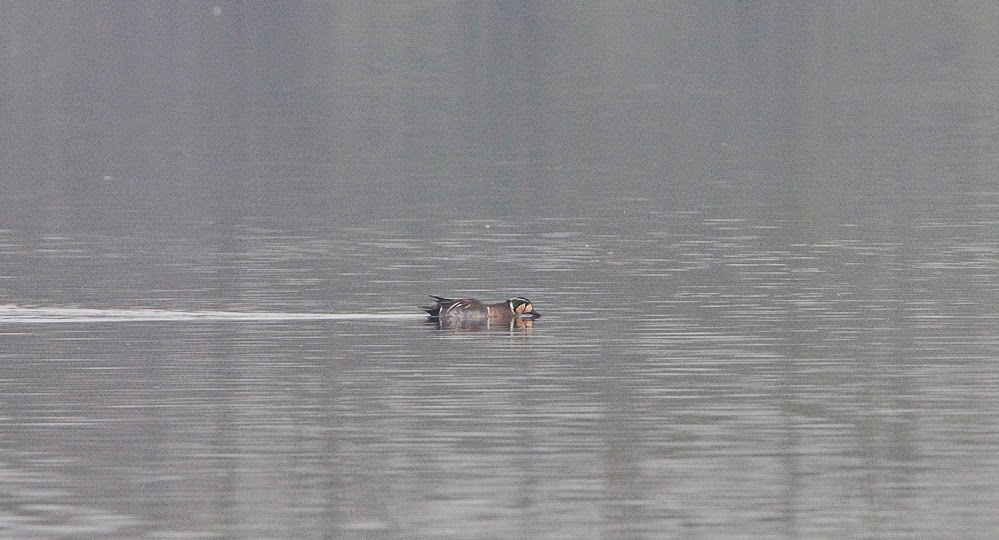 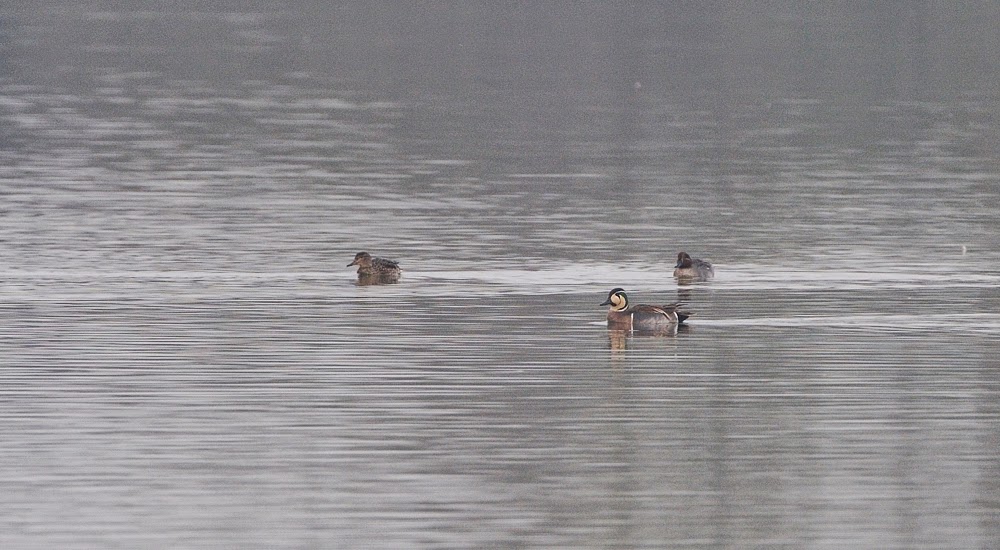 Day 2.
After some much needed sleep I again set off for Fen Drayton this time with my Dad. I also arrived prepared with wellies this time!
On arrival at the hide a birder was already present, and news greeted us that he had not found it. That dreaded feeling then goes through you, well my Dad anyway, I had seen it. The birder present had travelled up from south of the '25 and he had said he was about to leave before we arrived as with no sign and having to go to work didn't think this was going to be a successful trip. But as we scanned around, joined by another birder visiting for his first time here, a flock of Wigeon took to the air from the nearby grass bank, just about out of sight due to the tall reeds surrounding the hide, and then the shout from myself and the last birder in....Baikal ! 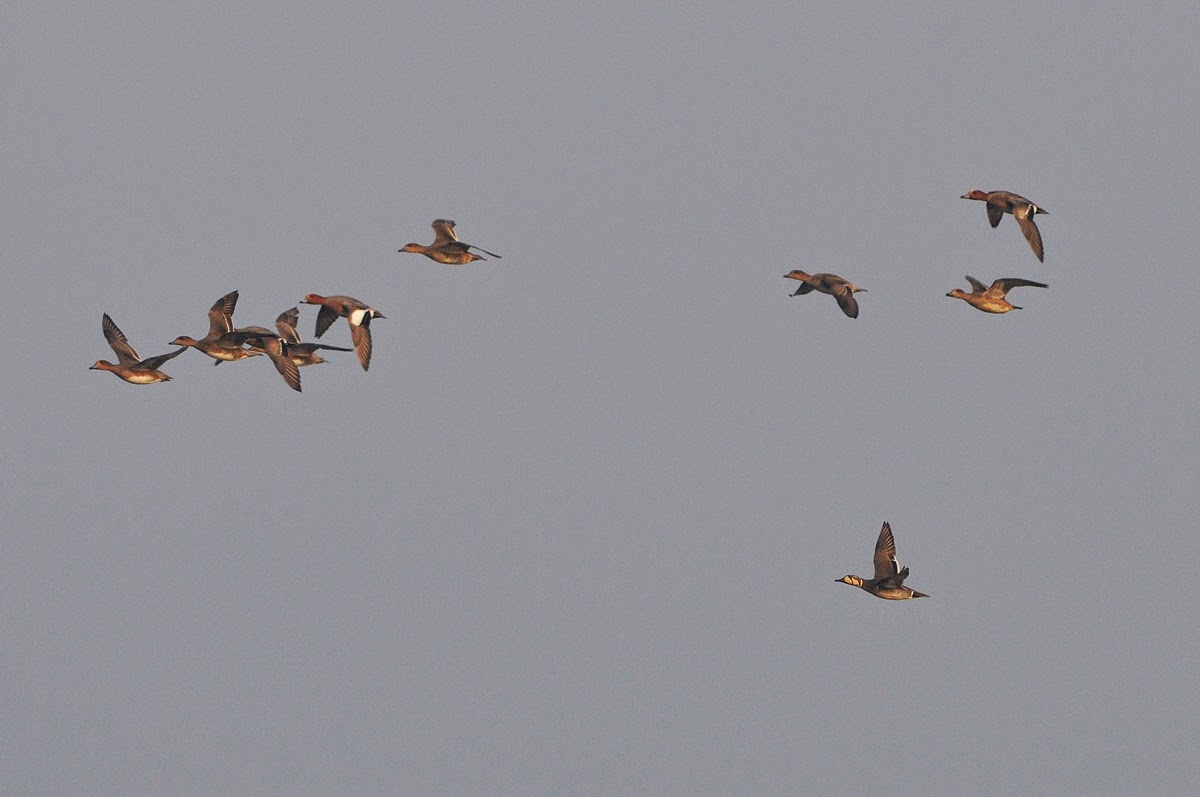 Thankfully it was still present and had obviously been mixed in with the Wigeon, I knew it could hide up well, as from the previous day. A happy vibe was now present and probably glowing from outside like a bowl of Ready Brek on a cold winters day. It flew a couple of circuits with the Wigeon before alighting the water in pretty much the same area as it had first been seen by Sarah and I the day before. It then proceeded to ......sleep! 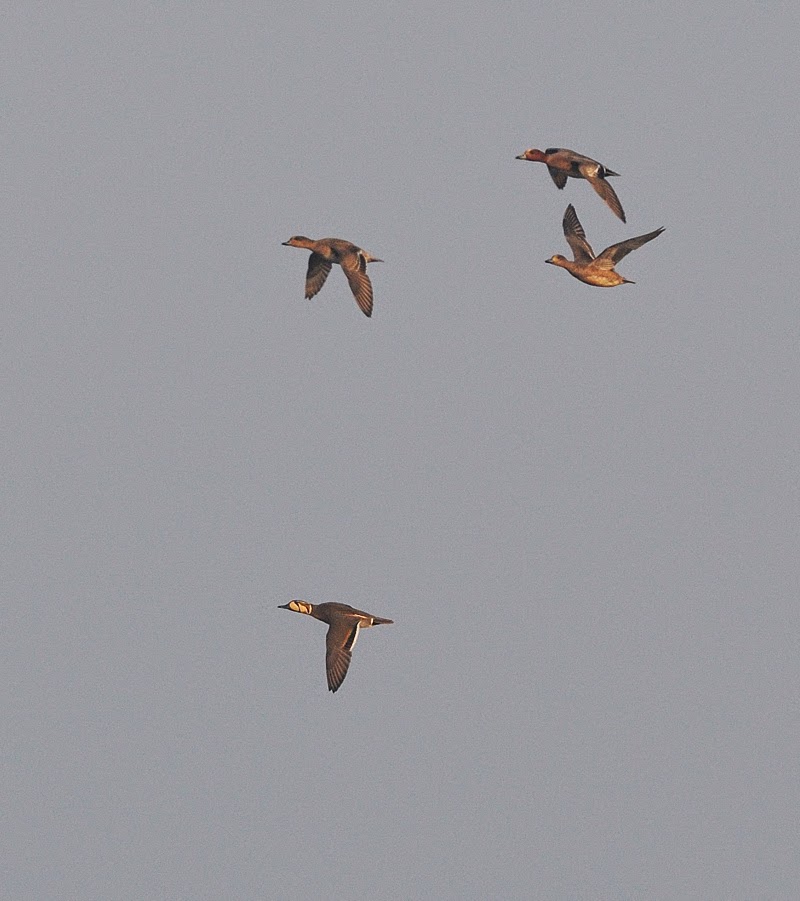 After some time and all of the Wigeon leaving the Baikal on its own asleep, it started to feed up and down the same stretch of water off the spit of land. Actively chasing down flies on the water and picking them from the air, keeping company with just the Wigeon it never ventured any closer. 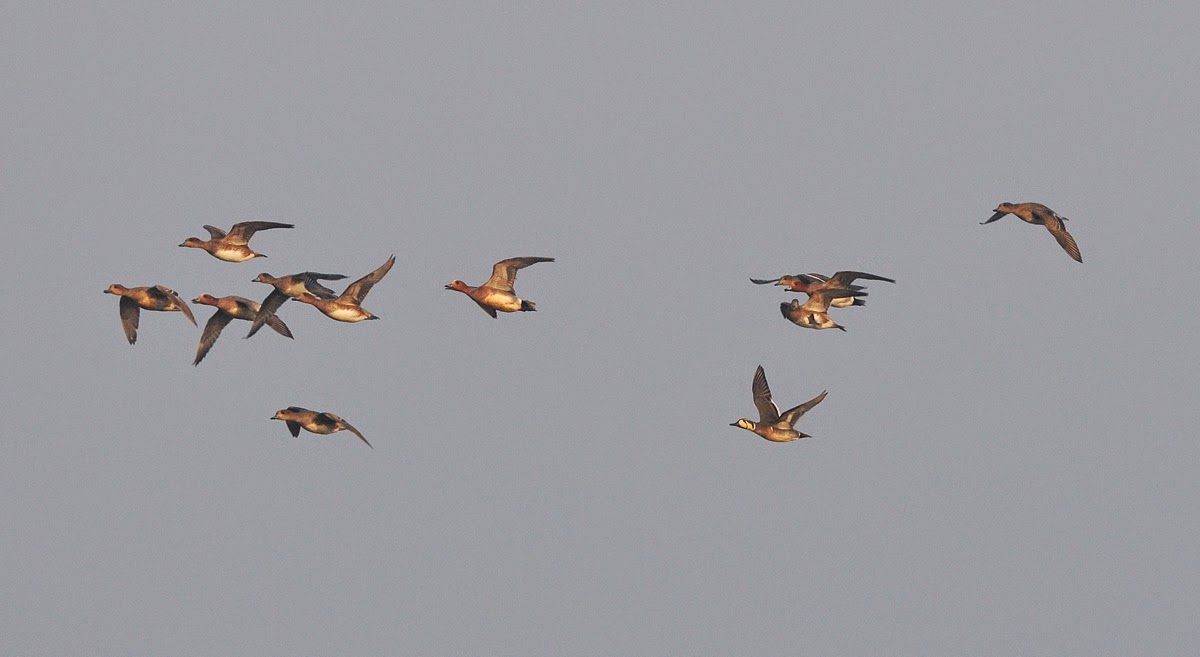 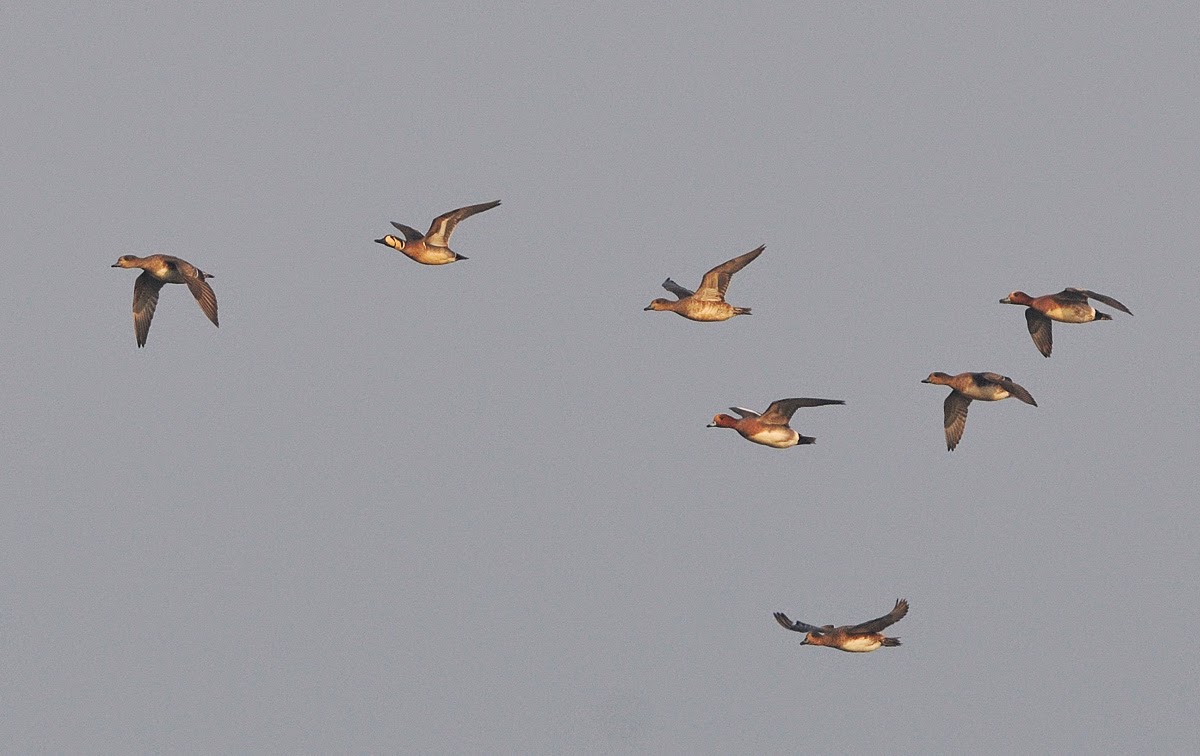 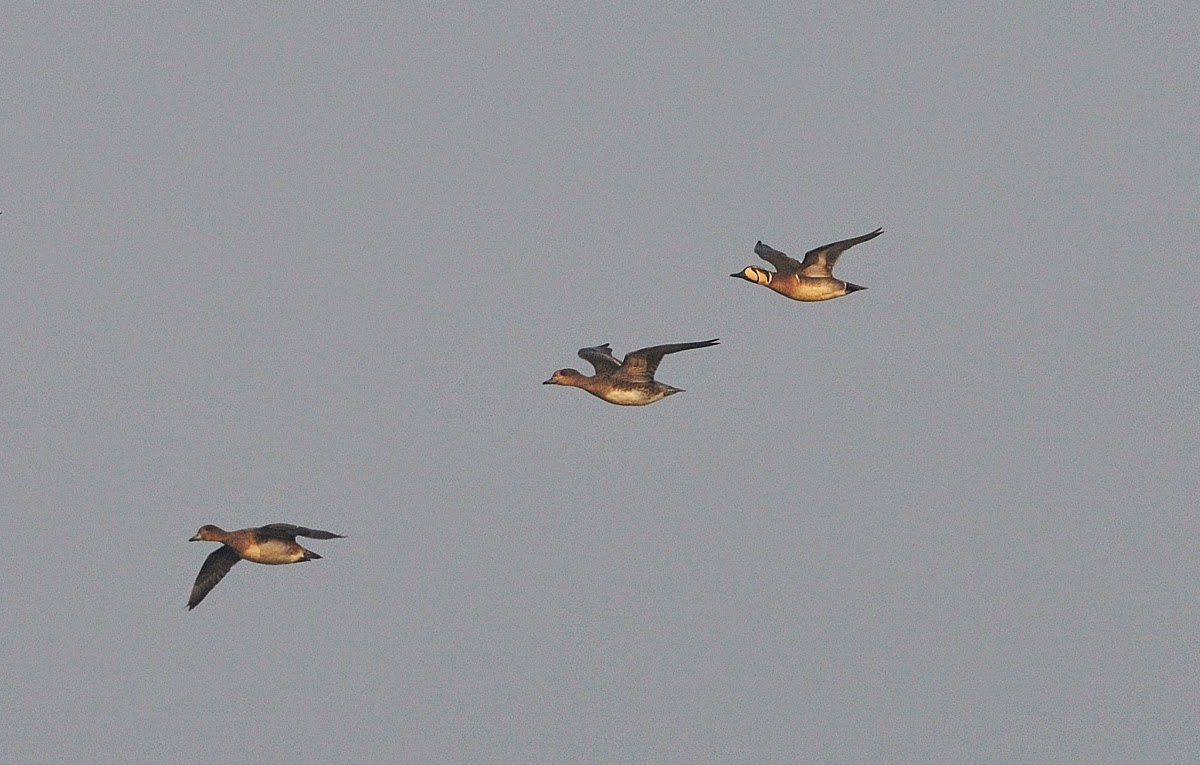 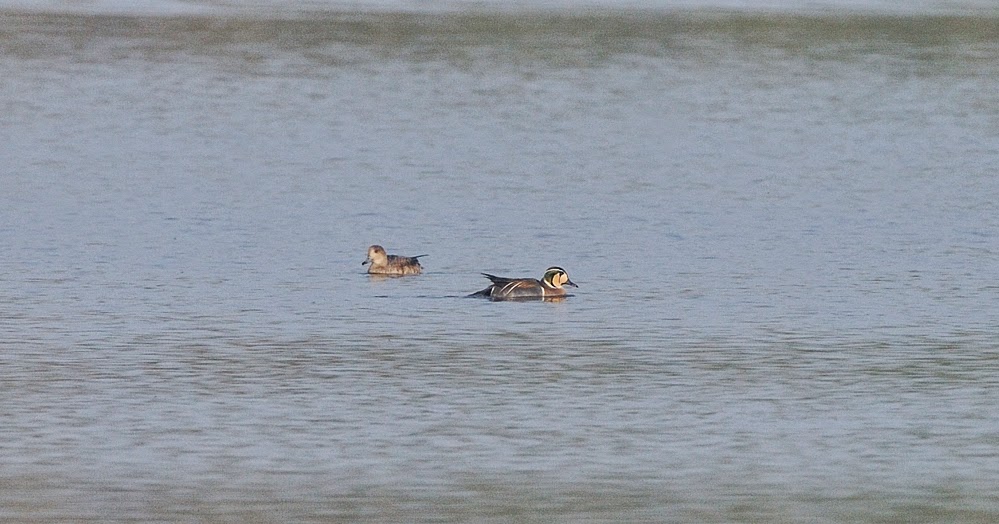 Another successful trip and the weather was a lot brighter making this bird look even more stunning. Whether this will be accepted, who knows at the moment, but why shouldn't it be, fully winged, no rings present, no up-ending only feeding on insects,keeping company with Wigeon or itself, and not asking for bread. Talk of it being the Lancs bird that has moved down and attained full adult plumage, who knows, but how pucker does it's CV have to be to be pucker? 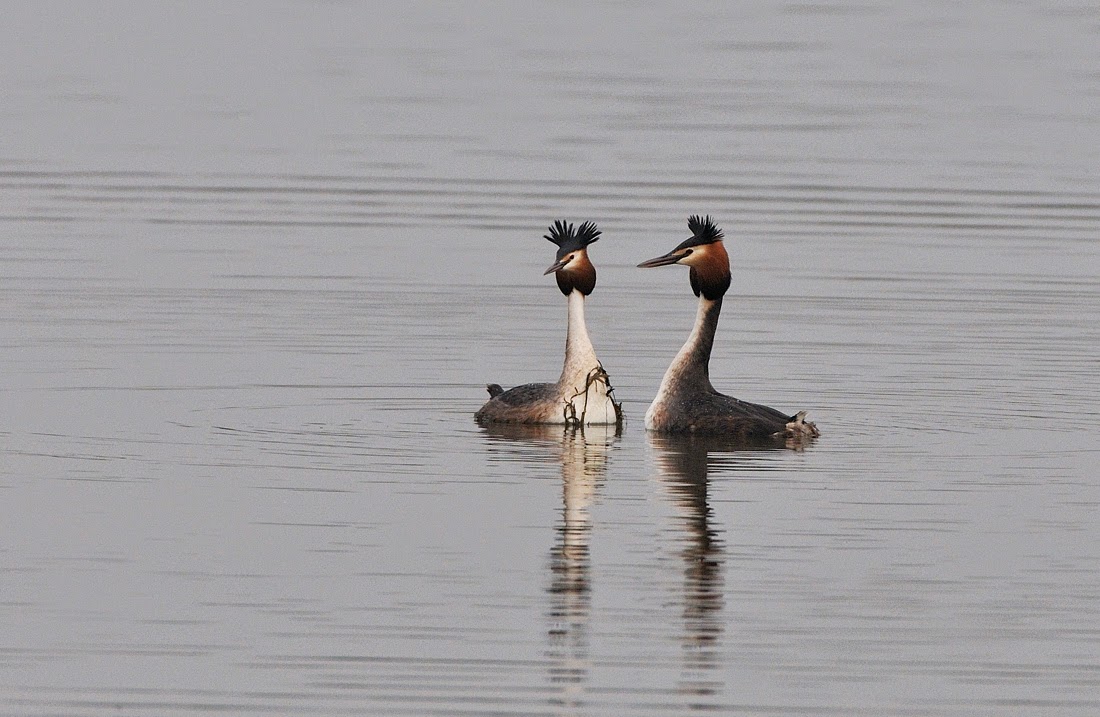 It was nice to take in some of the new arrivals whilst, albeit quick marching, to the hide and walking back to the car on both days. There were Chiffchaffs singing everywhere, Blackcaps in good numbers and also showy Cetti's, but I either didn't have the camera to hand or they did not pose long enough for a shot, mind you I haven't seen Cetti's pose out in the open as much as I did on the second trip. And as my Dad and I packed our gear into the car boot, I heard a loud rustling noise from behind the viewing screen, so I approached alone and as I viewed through the screen I saw a fox trotting off with something in its mouth, unbelievably it was a Great Crested Grebe it was carrying off! I presume the grebe was nest building/prospecting too close to the bank and it was had, the fox wasn't wet so it didn't go in after it. I thought I might of seen a Sand Martin or Swallow but alas not one, but a great couple of mornings out. 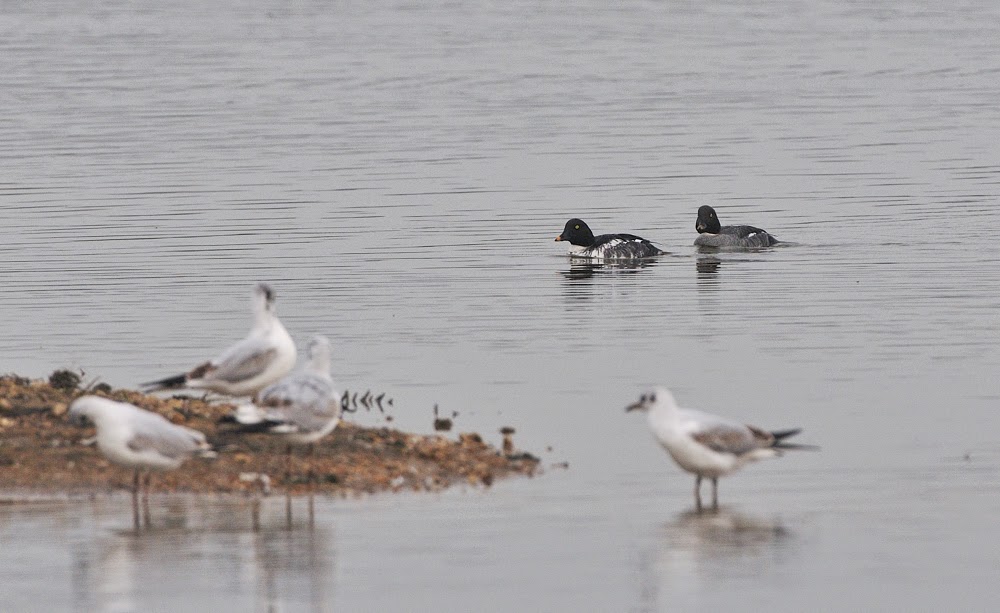 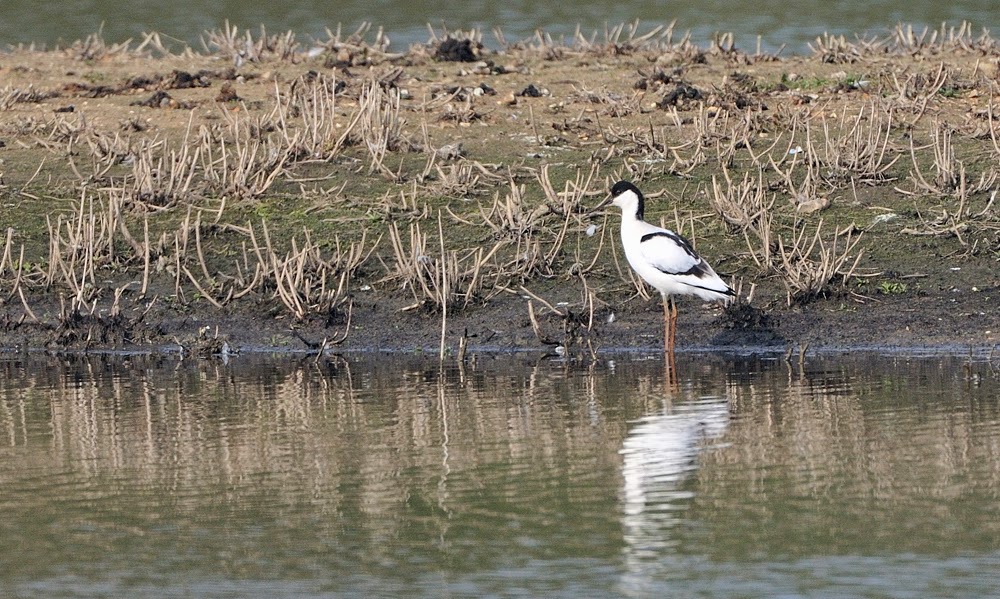 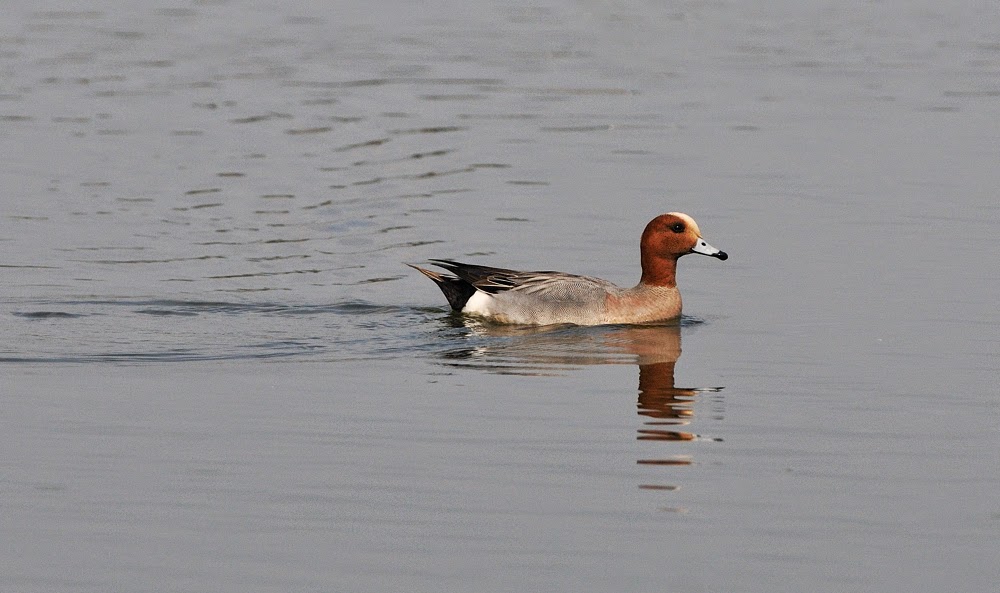 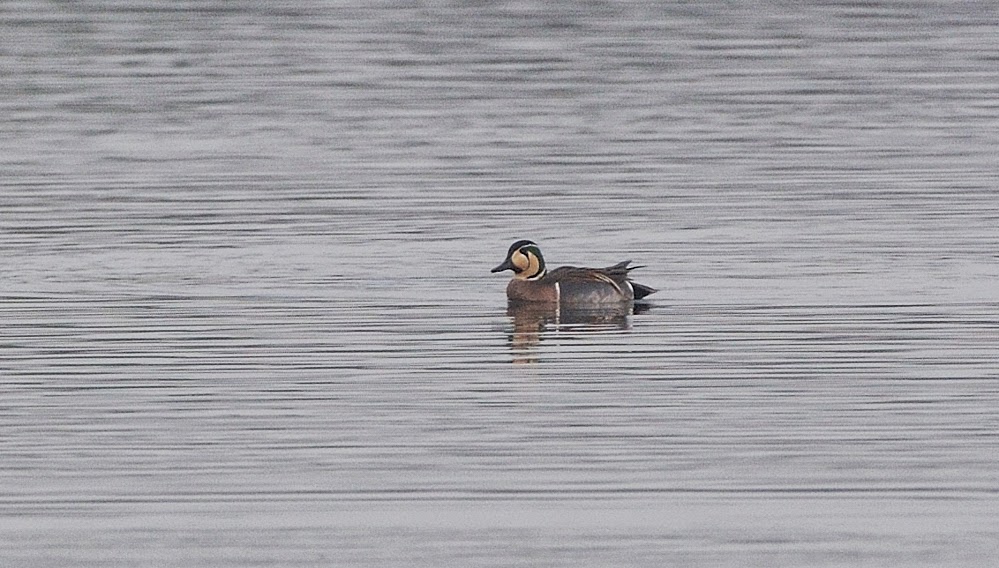 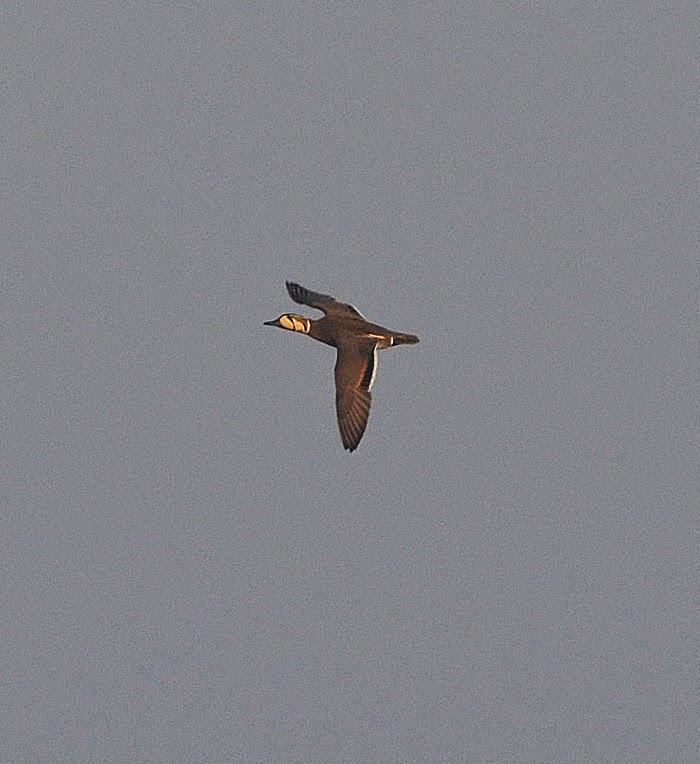 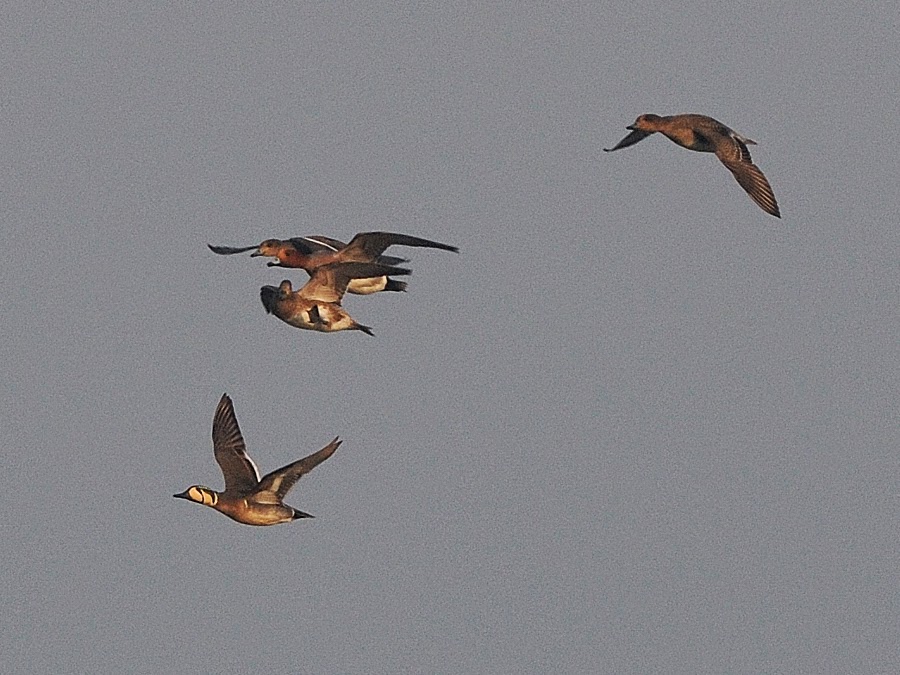 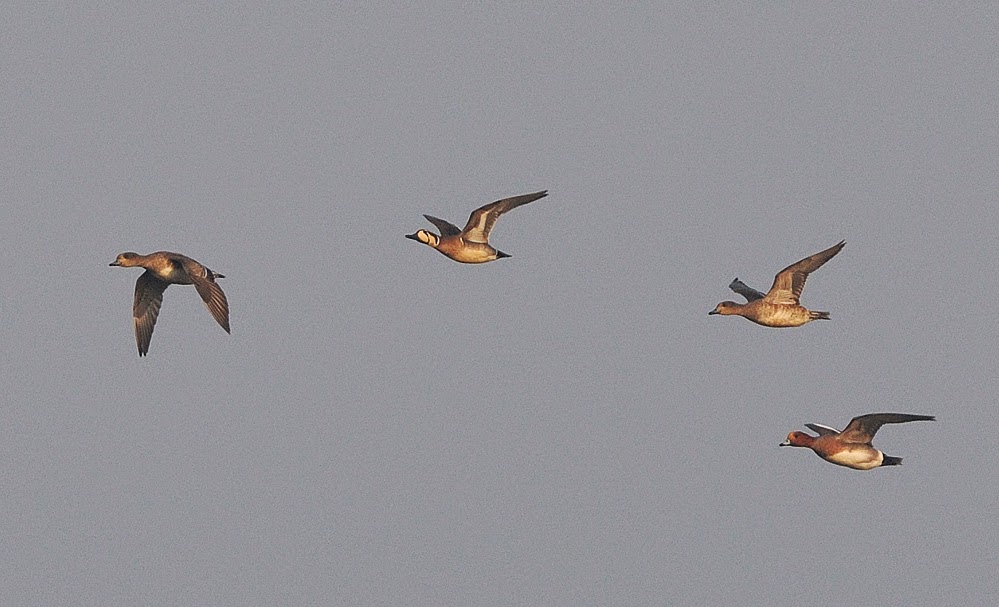 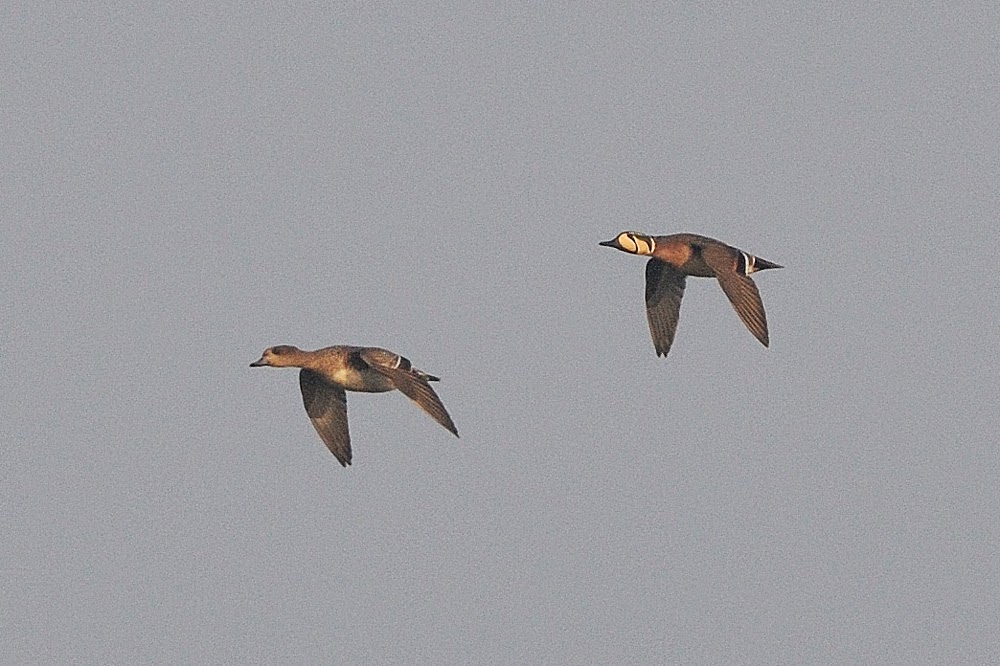 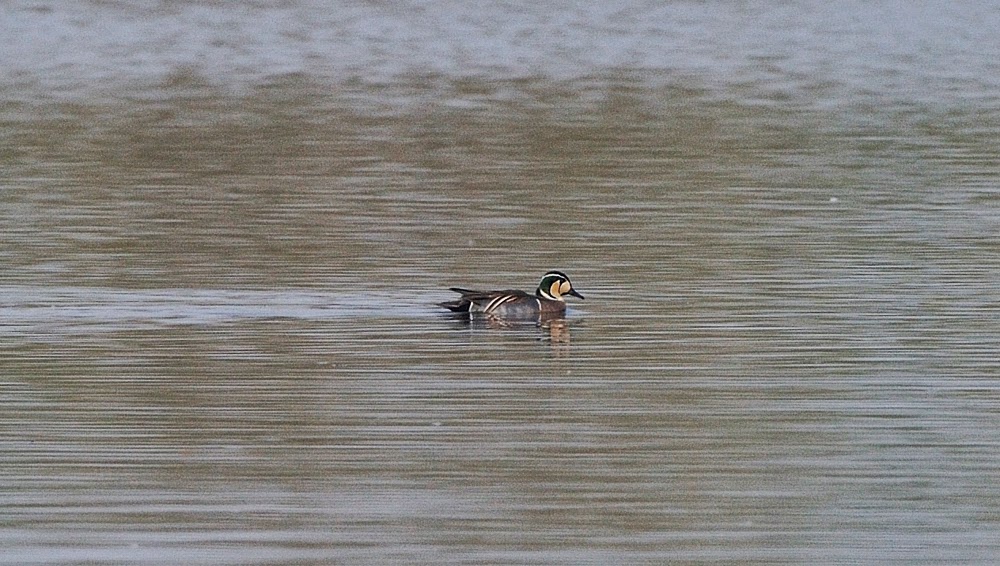