It had been a while since I last went to Abberton, and it looked totally different when I arrived at the main gates before first light. There were plenty of waders in the adjacent bay busily feeding and moving around. Once the sun had risen and the birds were starting to show better it was time to start scanning. It wasn't long before I was joined by a Essex birder, and after scanning through the waders I picked out one that looked decidedly "plump" and was not associating with the Little Stints but rather preferring to feed alone. On quite a few occasions the whole flock of waders would take to the air before landing and then the process of picking the bird out the bird ensued.
Once the reserve was open everybody moved around to the boardwalk behind the centre, from here the light was a lot better now and the smaller waders could be picked out better. Once again the Little Stints were picked out and not far from them was the "plump" bird again. Most of the time views were distant, but you could always pick this bird out. Its feeding behaviour was not as erratic as the Stints and the shape was obviously stockier. As stated in identification literature the Semi-P' can "show a diffuse pale mantle V at a distance", which this bird certainly did but nowhere to the extent of the stints along with darker upper scapulars helping to accentuate this V. Now that the Semi-P' had been found and everyone was happy, it was a case of keeping your eye on it, it frequented the mud flats further out once away from the bay area and would often be lost amongst the roosting numbers of dunlin and godwits, or lost in flight when they all took to the air. Another new addition for me and another without the use of the camera, back to the old ways. 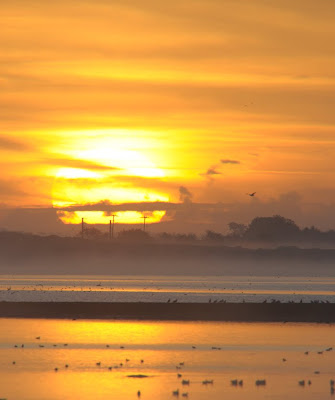