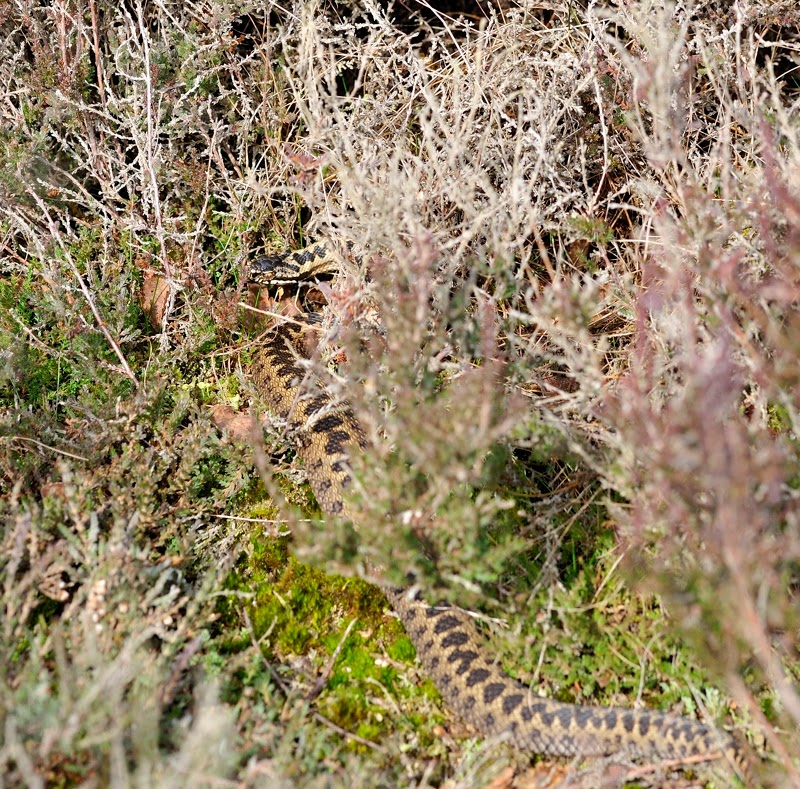 After three or four years my Dad and I finally got to find, and for me, to photograph Adders. I had seen an Adder before in Norfolk, many years ago. But back then I wasn't into my photography and I really wanted to get some shots of these snakes. So here we were, my Dad and I, after searching for a few hours and as many a time before, could not locate any Adders. Maybe it was too cold? Maybe it was too early for this location? Here we go again we thought, and then on our last sweep of the heath......I found one!
Thank the Snake Gods, Oh my what a relief, I couldn't believe it, after all these visits we had finally found one. The image above is how I found the 1st one, tucked under the edge of a heather bush.....and did you notice I said "1st"??? Yes just like the saying "You wait for ages for one bus and then two come along", well that's exactly what happened whilst I was waiting for the 1st one to re-emerge. 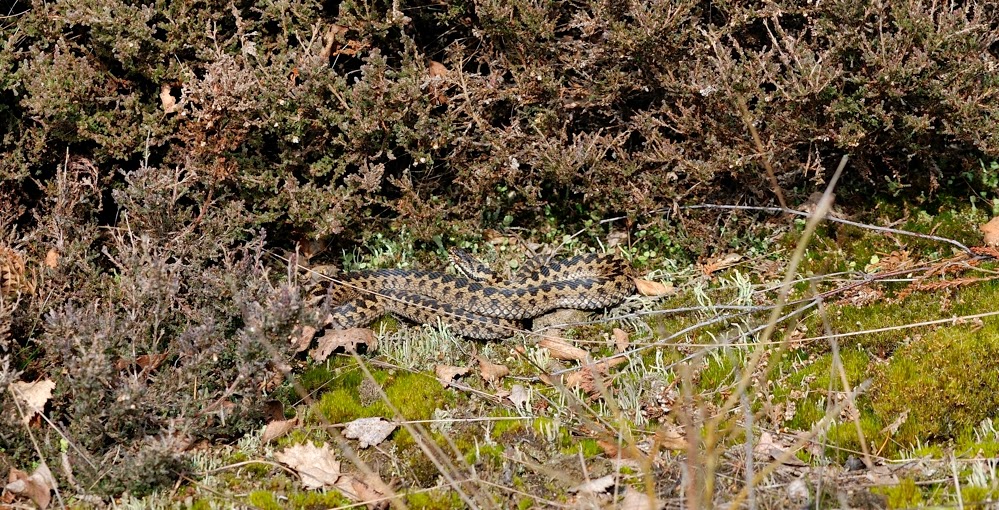 Any movement close by to them and they slowly move back under the cover of the heather clumps, but with a patient wait they re-emerge to sun themselves again, and today they were constantly being driven back under the heather by the amount of dogs running around freely,and they all decided to make a bee-line straight for my Dad and I, but more of that later. The image above is of the 2nd Adder, which my Dad located whilst I was with the 1st, so I quietly joined him and snapped off a few shots, meanwhile my dad departed to look for more and sure enough to his delight he found another,pictured below. 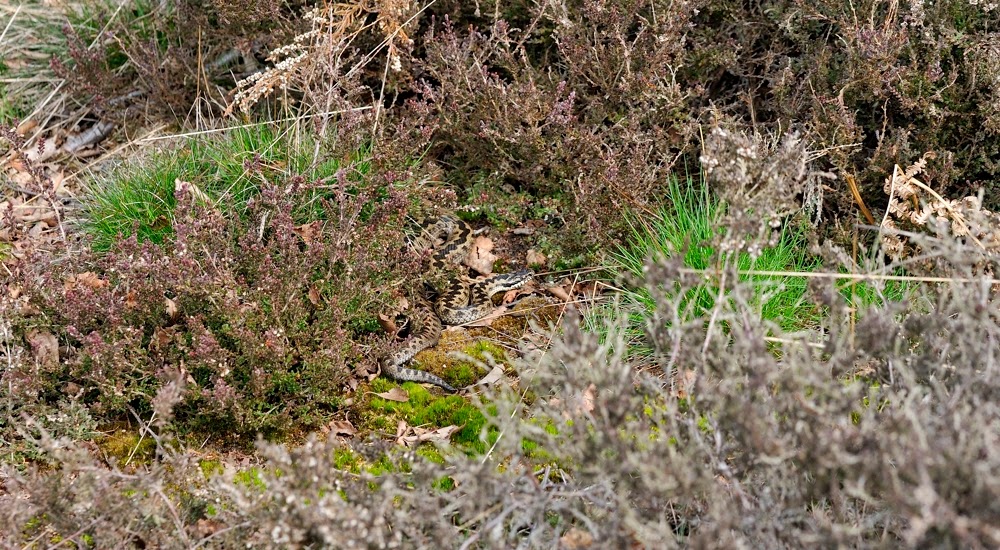 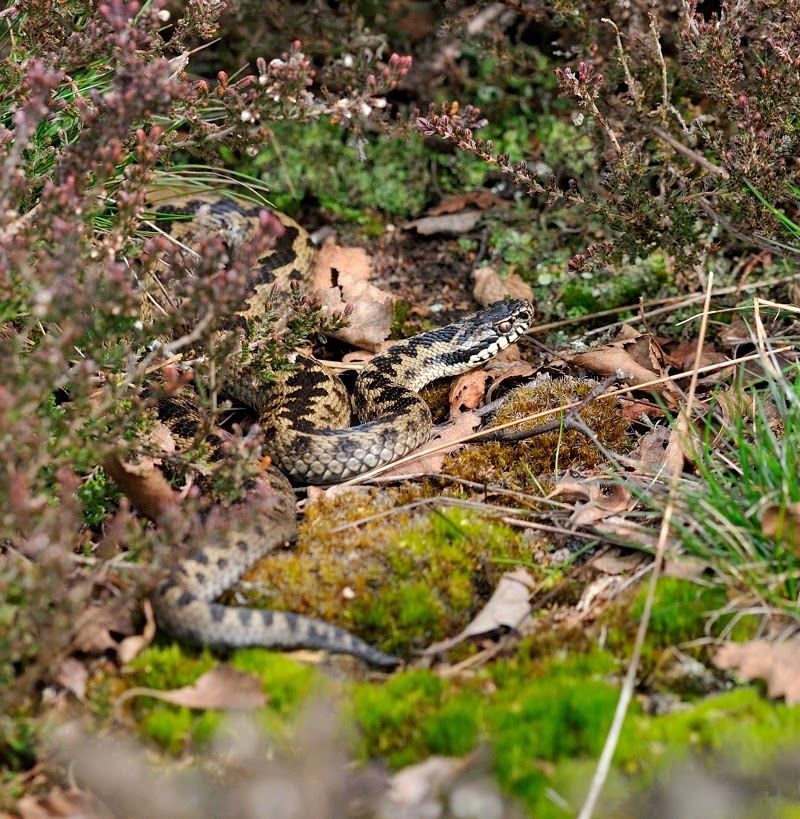 This 3rd snake was the largest of the lot. And with a plentiful supply of Common Lizards around it's not surprising. Another snake was seen disappearing under some heather by my Dad which made 4 snakes seen, we were so pleased it had finally gone right us. I spent some time from then on photographing the 3 individuals on show, patiently and painfully waiting for them to slide back into the sun, laying prone and leaning on my elbows caused my neck to seize up give me grief, but I wasn't going to be put off,the pain would have to stay. And getting back to the dogs, well some were very pleasant, and blending in so well, our own fault really, head to toe almost in Realtree clothing seemed to make us invisible to the owners whom didn't have any idea we were there until they saw their dogs jumping all over us, but when I turned and saw a huge Mastiff slowly walking towards me, I thought being on the ground wasn't such a good idea so I gladly stood up, but he was adorable and friendly when he actually got to me. One such pair of dogs however had me shouting at the owners to get their dogs back because of the chaos they were creating, I was just about to shoot off a set of images as the Adder was emerging from the heather when one of these dogs ran around and around barking between me and the snake! of course the snake then departed the scene, and the dog then ran off with one of my Dads gloves! these owners did not and could not control their dogs at all. 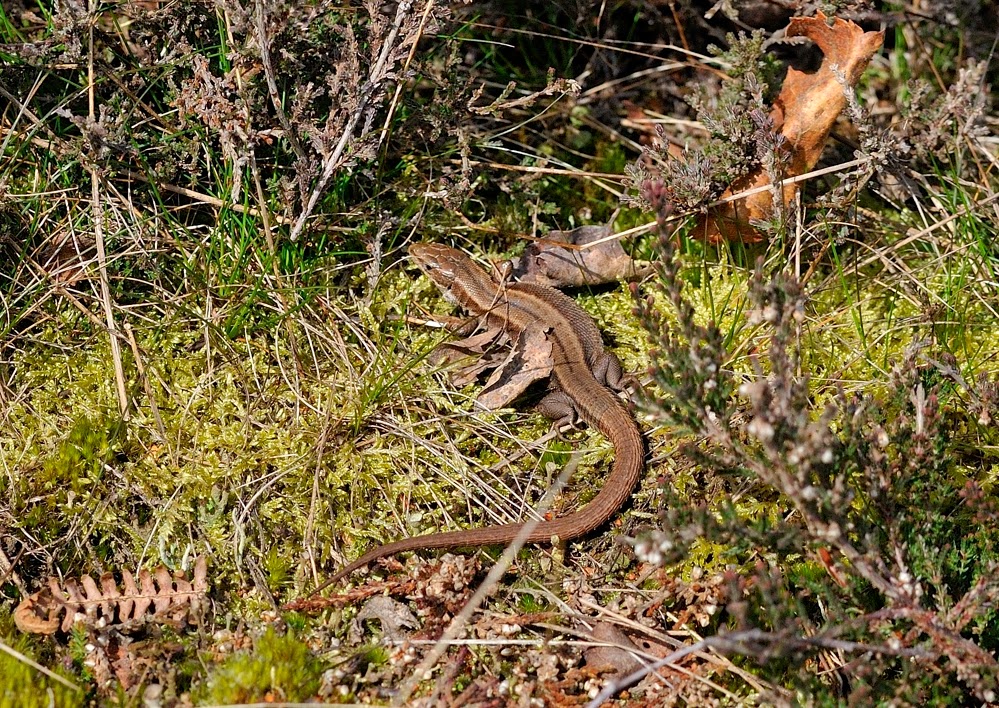 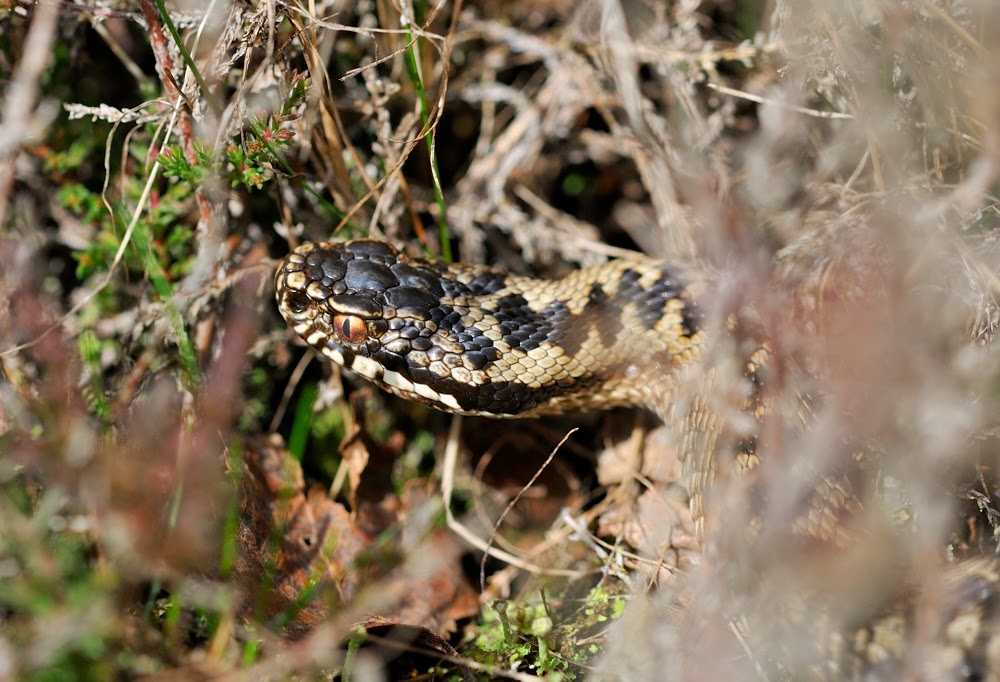 It was a great experience photographing and watching these snakes and look forward to returning again. I was surprised how small the head looked, and they really increased their body size when they flattened themselves out to absorb as much sun as possible. Once I had gotten some shots we set off back to the car and then onto but The Lodge RSPB for a quick look for a Lesser spotted woodpecker seen a couple of days before, but there was no sign, that didn't matter as it had been the Adder's that had stolen the day. 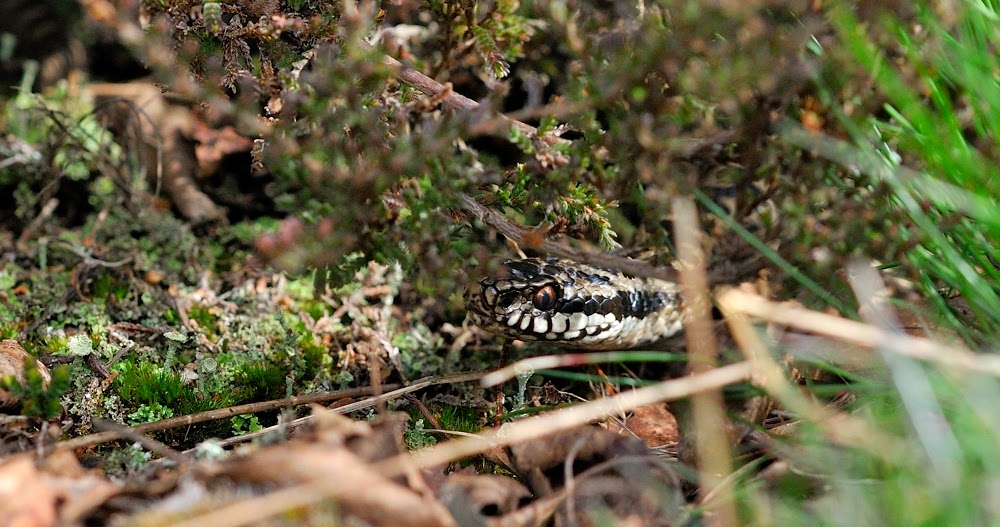 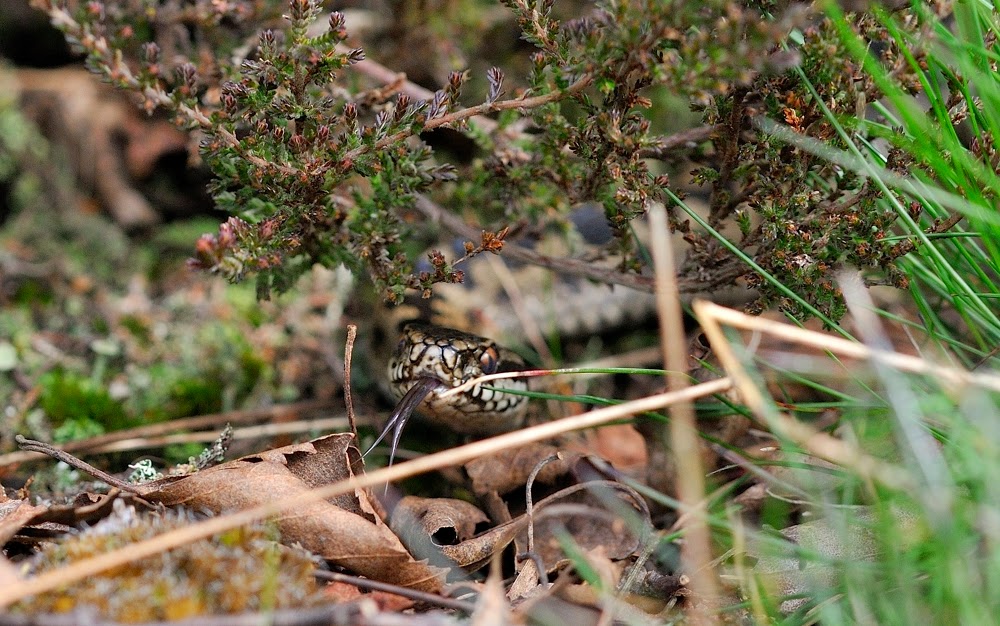 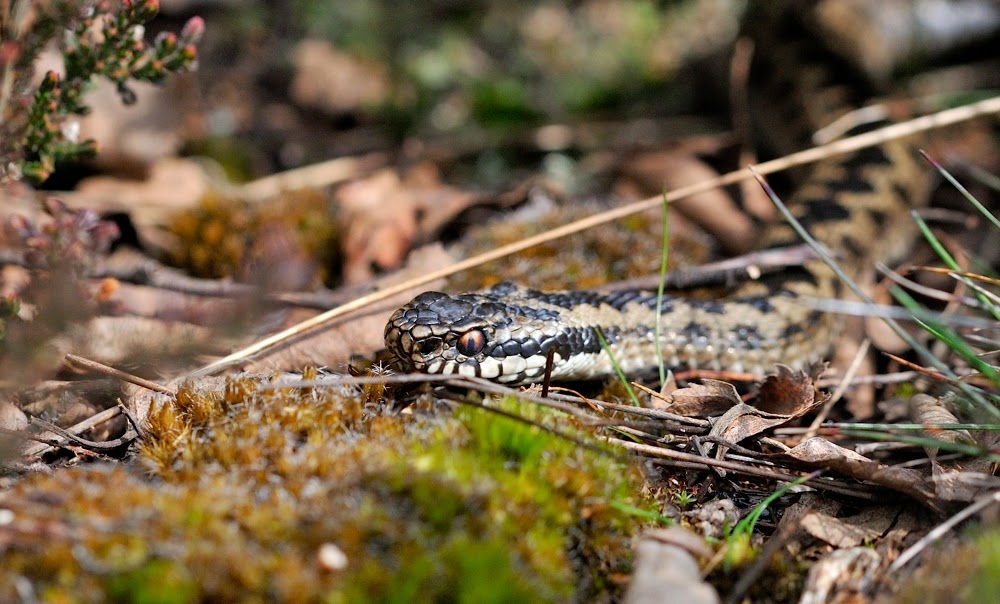 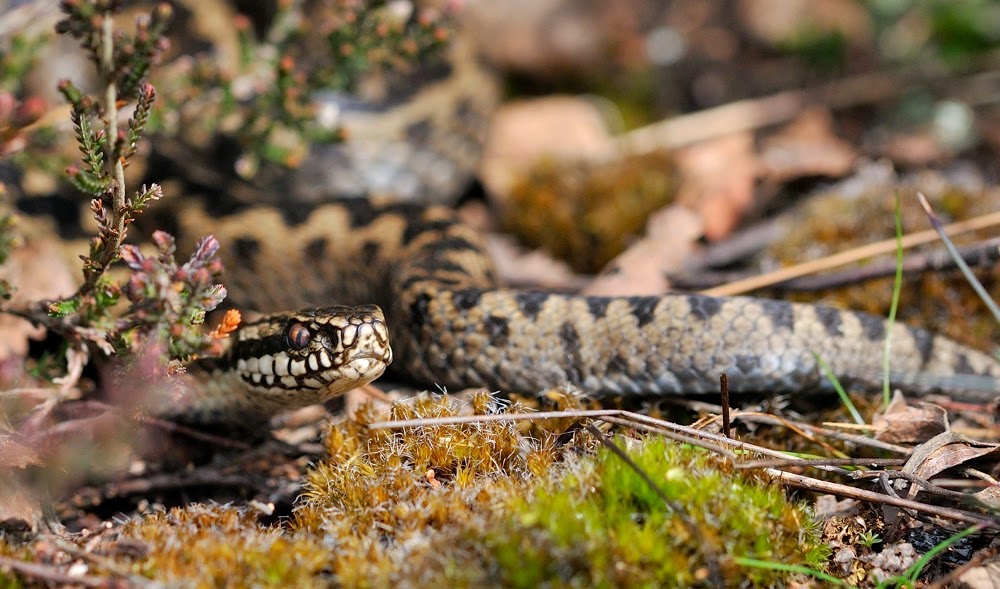 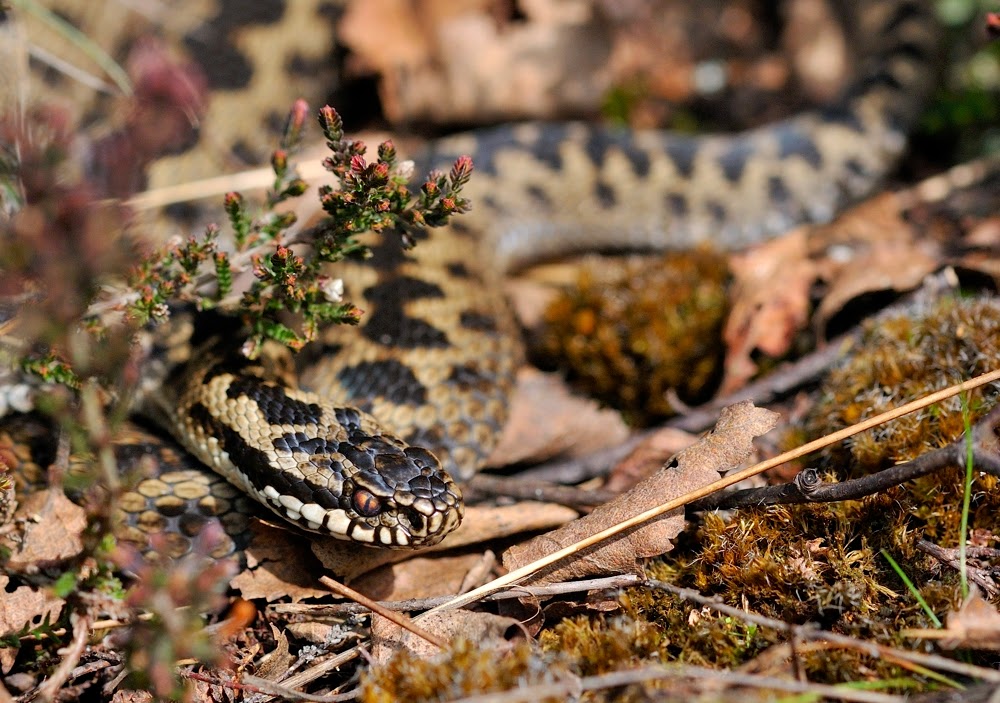