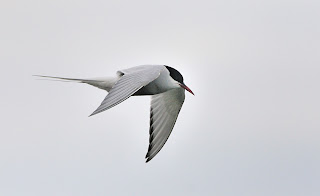 Typically after saying "No gloves needed" last visit to Bev's, I had to put them back on for this visit, there was a cold feel to the early morning start and greyer than it had been. Still I hoped that there would be some new year additions as a lot of stuff had been reported through. I was greeted immediately by Swallows in and out of the outer buildings, a good start. And on nearing the lake the sight of a couple of Terns lifted the spirits. 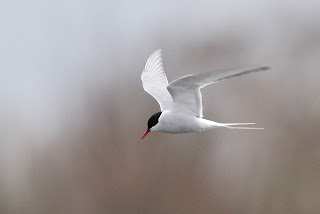 The Tern sat up on the post although distant at this time showed a dark tip to the bill so I assigned that to a Common tern, new for the year but I was hoping for a Arctic, there had been sightings nearby so I was glad to see 2 Arctics further across the lake, a lovely sight to see these birds return and worthy of having their snapshot taken once again. 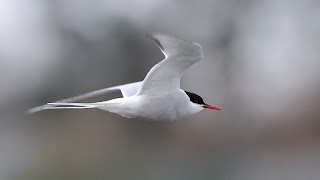 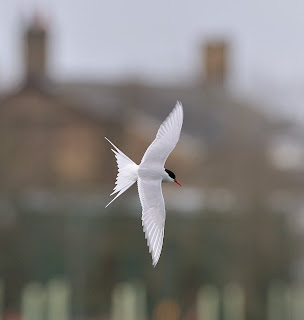 Whilst watching the Terns I heard a distinctive call that I had been waiting since the start of the year to hear...The Kingfisher was back and joyfully the male was then seen carrying a fish to the female with which to woo her, excellent a 4 month wait and the pair were now here and courting. To add to the excitement, deep breath...calm down..., a Yellow Wagtail flew up from the grass and overhead, a NEW site tick and if not enough good numbers of Swallow, Sand Martin and House Martins passing overhead adding to the year list. What a morning this was turning out to be. 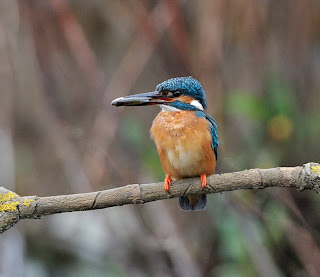 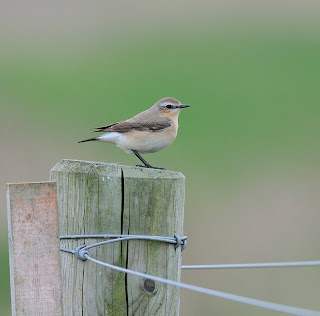 But the morning only finished better.... now for my 'White Arse', no not me personally before you click off in  disgust... the apply named Wheatear ( known across counties as White Arse due to the flashy white rump)
The bird had flown from the grasses in front of me and landed on the fence post nearby..I was now frozen to the spot, heavy breathing ensued as I slowly moved the camera into position for a record shot!..this was the 2nd new site tick of the day. The bird posed beautifully for me and then flew atop a large bush near the northern lake. I followed as it had been using the gravel tracks to move along, so I positioned myself nearby hoping it would once again come back down, it was then that my attention was drawn to a call from nearby... a continuous reeling coming from some bramble bushes, oh my god surely I now had a 3rd site tick..a Grasshopper Warbler, then I saw a LBJ (Little Brown Job) fly from the bushes and out of sight towards the main lake.. then the doubts and thoughts set in, could it be a Gropper, no doubt about the call but now I want a picture, so hopefully it will still be around next visit. What a morning it turned out to be. 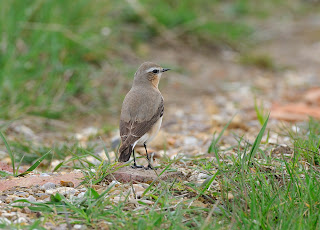 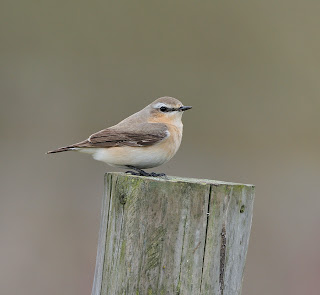