August was a split month for the weather, the start was warmer than expected or indeed forecast and then the last half took a grey and windy turn for the worse, but I still managed to obtain some decent sightings and photographs. First up at the start of August was a message of 15 Spoonbills heading east along the coast from Cley, Spoonbill was a new species for me to see here or from the garden but I haven't managed to get a photograph of any as of yet, so as the birds were being tracked along the coast and they reached Cromer still heading my way along the coast I took my Dad, staying at the time, and headed for the clifftops and looked towards Overstrand eagerly awaiting their arrival. It wasn't long before we distantly saw the group all lined out following the cliffs, as they reached Trimingham they seemed to head inland....!! It seemed I wouldn't be getting any photos this time either. But they came back into view and seemed like they couldn't decide on what direction to take, just circling around, luckily they kept to the shoreline and proceeded towards me. 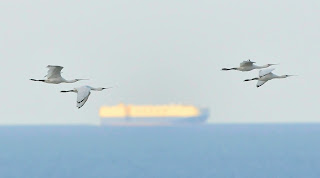 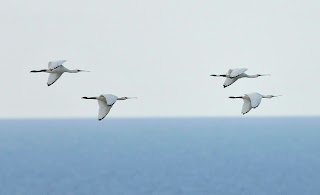 Happily I now have my Spoonbill photos.
On the 7th Sarah and I watched a lone Red Deer along the lanes towards Gimingham, and also a single Banded Demoiselle along Church Road. I had a few sightings of Curlew moving along the coast during the second week.
During the warmer days at the start of the month it was very noticeable that Peacock butterflies were having a fantastic year. I have never seen so many, the garden seemed full of them, along with a couple of Commas and Small Tortoiseshell and just one or two Painted Lady's. 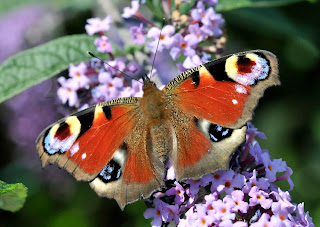 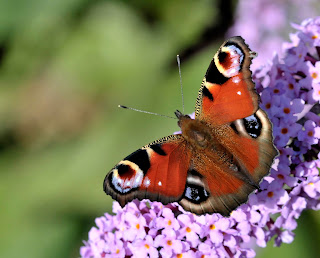 This Southern Hawker rested up in our holy tree for a short time.
And a Banded Demoiselle kept hanging around the garden one afternoon, a real delicate and beautifully coloured Damselfly. 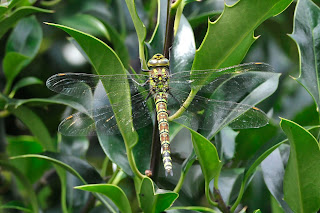 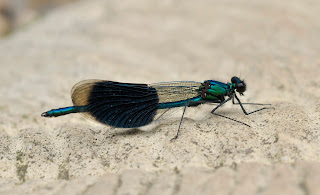 My second only Garden Tiger moth (both being seen in Trimingham) this one was crossing the lane on our morning walk, I carefully placed it amongst the side verges. 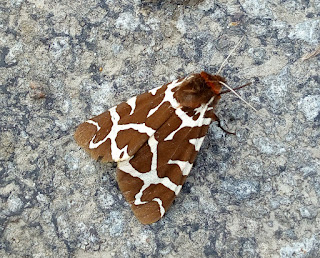 The second half of the month saw the winds pick up and blow in continuously from the North, sea birds and wildfowl started to move through in numbers, Gannets, Wigeon, Teal and quite a few numbers of Skuas were being reported from along the coast, but mainly distant. Double figures of Swallow passed the coastline on the 21st, probably the last ones to be seen this year?
In July we saw a remarkable number of Mistle Thrushes together, and on the 29th we counted another 9 together heading southeast. Not a packed month I thought but remembering the Spoonbills made it a rewarding one until the last day of the month that is....it all escalated then! 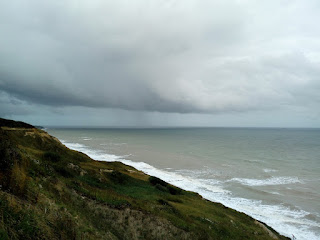 On the morning of the 31st Sarah said to me that she had seen a bird flit over the garden fence into the neighbours, not sure what it was she described the tail as being a red colour, I thought Redstart or Black Redstart, the latter would be new for the garden if it was still hanging around, and sure enough as if on cue the bird flew onto a shed roof and displayed  itself as a Common Redstart, still a lovely bird and only the second one from the garden. I rushed inside to get my camera to get a photograph, it had probably just arrived that morning and as I clicked off a few images it was to be the start of 40 minutes of awesomeness! Not only did it hang around but it began to feed and pose around our garden, over 400 photos later it flew off. What a momentous visit though. 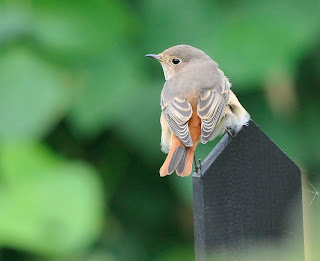 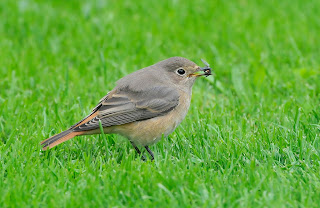 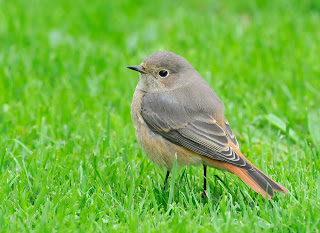 Being a newly arrived bird I thought that I would go and check around the churchyard to see if any other birds had dropped in.
Heading into the churchyard after the episode with the Redstart I was eager to see if maybe a Pied Flycatcher had arrived too. I moved onto the east side and having only been there a minute I saw a bird flit out from under the small yew bush, catch an insect and then zip back in. I picked up on buffish colours on the underparts and thought maybe it was the redstart again, but it was slightly smaller and as it flew out of cover again I immediately saw white in the tail, not a redstart then, and I knew  that I was watching a Red Breasted Flycatcher. Panic set in and I ran straight home, just across the road, to get my camera, this was another species I had seen before and in Trimingham but a photo had eluded me so far. I headed back towards the churchyard and met a fellow birder/friend at that precise moment and eagerly stated "Red Breasted Flycatcher".... we moved on around the church and I located it still in the same yew bush feeding. For the next hour we patiently waited to see this lovely little, elusive and flighty bird move around the trees and give itself up every now and again but it was dull and it kept to darker areas of the trees causing a lot of manual adjustment settings on the camera to be made and a big headache,  happily for me I managed to grab a couple of photographs. It was mentioned that this was the first one to be seen this year which put a silver lining to the day and indeed month. 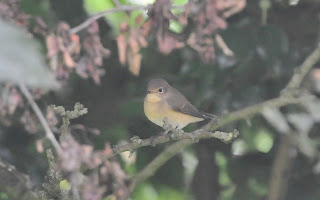 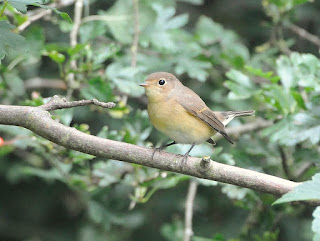 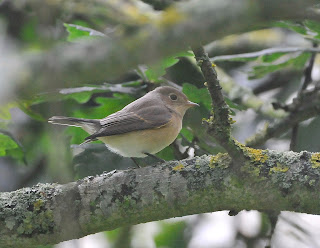