At the start of the month the male Siskin was joined by a female, they visited the feeders on a couple of days but were not seen as the month progressed, hopefully breeding somewhere. There had been plenty of White Tailed Eagle sightings around the county and a few close by so I was keen to add this to the patch and hopefully the garden list. Thanks now go to Sarah, whilst in the garden on the 9th of the month she looked behind the church, I was looking the other way, and immediately picked up on a bird of prey stating how large it was...there's no mistaking a eagle when its that low and sure enough we were watching a White Tailed Eagle! !. I ran indoors to grab my camera and realised it was drifting inland so off I ran down Church Road till I could see the eagle through an opening, now quite distant but close enough to get a couple of record shots. After waiting and missing out on this bird for the last few years I now had it in the bag! 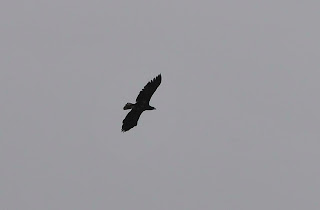 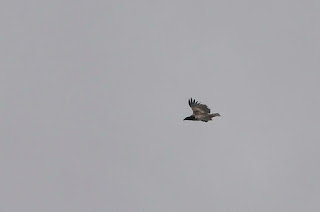 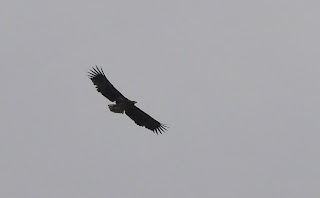 Mid month we heard our first singing Blackcap of the year, a group of 40+ summer plumaged Golden Plover were frequenting the ploughed field off Church Road. On the 20th my first Wheatear of the spring, last year I failed to see any during the spring instead having to wait till the autumn migration. Despite the cold northerly weather the birds were trickling through, White Wagtail and Common Whitethroat soon started to pass through and within a few days there seemed to be Common Whitethroats holding numerous territories around. 3 Wheatear fed together in the potato field off middle street, fresh in and gone the next day. More Swallows and Sand Martins flew over the garden and a welcome bonus was a Ring Ouzel past.
End of the month saw a movement of Whimbrel along the coast, I had some over the fields and over the garden. Common Buzzards were passing in good numbers some days, 8 in one group seemed to be having fun on the cliff updrafts. 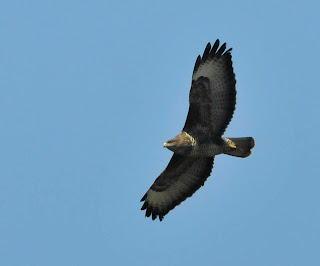 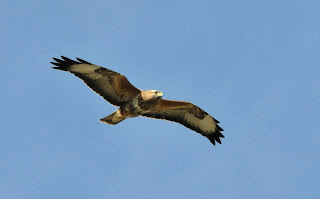 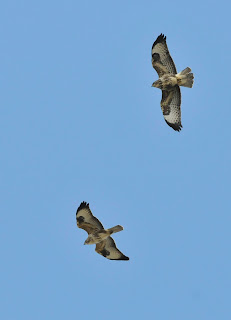