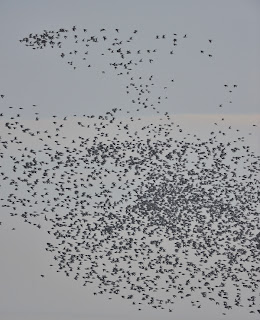 Sarah, my dad and I travelled up to Snettisham, Norfolk for the wader spectacle in October. The high tide forecast brought in the waders by the thousands, and there were a couple of hundred birders too. We arrived for first light and upon reaching the sea wall could already see many waders out ion the decreasing mud flats of the wash.

As we headed along to the far end of the reserve, the flocks started to gather and amass in huge shoals flowing along the flats as they were continually pushed in by the approaching tide.

The light was awful, that did not spoil things, I knew the images would be dull or edited to black and white, but that was not important, it was capturing this event of amazement and show the sheer brilliance of it. 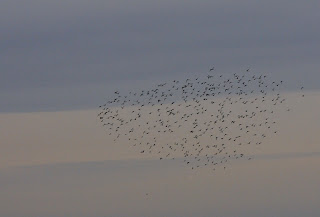 As the masses grew every minute, the flocks would take flight and twist and turn as one, how they co-ordinate themselves is unbelievable, they are packed so tight together.

As the last segments of mud remained the waders start to head inland onto the reserve banks. The hundreds of thousands of waders filter overhead and then disappear below the grass banks in front of the hides. I left it too late to be able to gain access into the hides, instead I waited for the flight shows from the footpaths around. 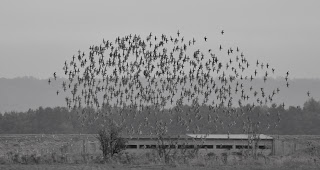 You just cannot capture the feeling you experience on camera, the flocks fill your entire field of view. I took some shots as they quickly appeared above the bank before spiralling down out of sight.

There are flocks taking to the air all around you, I didn't know what way to point the lens sometimes, and other times I just stared at them taking in their shapes and sounds trying to absorb every last bit of it. 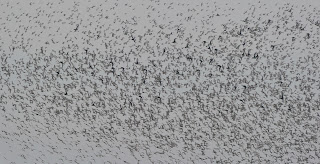 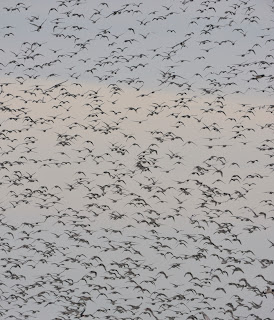 Then after some time of relative quietness, they once again take to the air, this time heading back out onto the mud flats where the tide is already receding. 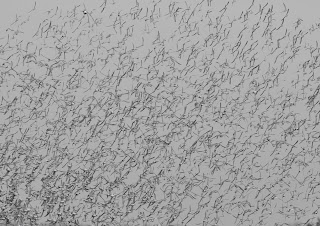 As they head out some gather into wonderful shapes, passing over the heads of the watching birders. And as they move back out to the flats they take a more direct route straight overhead and very low, the noise of their wing beats are mesmerising, I couldn't help but just smile and watch this wonder of the world. 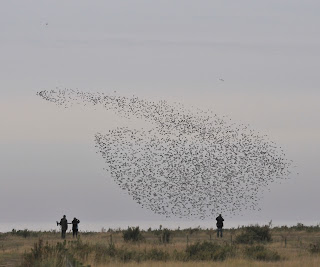 And then its back to normality with the thousands back out feeding on the mud, until that is when a predator arrives on the scene. In the image below the flocks took to the air as a Great Skua passed through. I know I will definitely be back for more and next time I will make sure I get to the hide earlier.