'Summer Duck' being an old folk name for Garganey, and this is one duck that I had been waiting to show at Bev's. On arrival I set off as normal along the southern side and was immediately drawn to a commotion in the hedgerow. The blackbirds were going mad at something and then I saw, presumably, a sparrowhawk dive into the hedge further along carrying what was probably a fledged blackbird judging by the assault the adult birds were throwing at the hawk. But the commotion moved into the adjacent garden and out of sight. 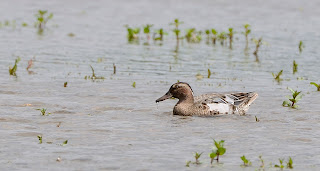 I then moved along and started scanning around, as before it was quiet and still holding a lot of water, so not a lot of waders except for Redshank. Then along the scrape edge hidden by plants along the water line, I caught a glimpse of a small duck amongst the local mallards. Just a brief view but, you know when you glimpse something on a bird that makes you aware of what it is straight away? Well that's exactly what happened and I was sure I had just seen a male Garganey! 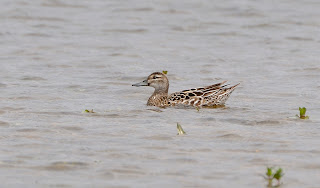 But then it went out of view, and bloody hell I thought could this finally be it? What seemed an eternity but was just minutes, the bird came into view again and now I was sure I had a male garganey, and then 'oh bloody hell', a female following behind too. I was elated to put it mildly, but then they moved back along the scrapes edge and out of sight again. Eventually they followed along behind the mallards and I was able to get some shots of them both out in the open and finally add them to the site list. 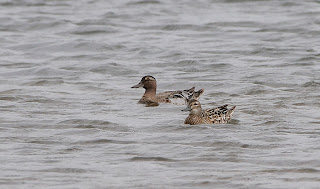 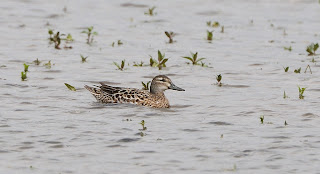 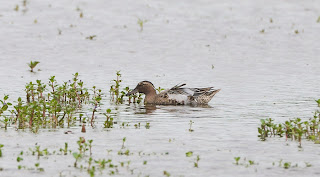 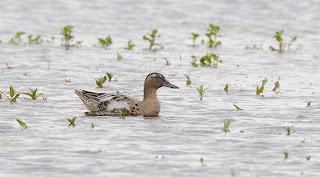 Being quiet otherwise on site I stayed and watched the garganey, a Little egret flew in, almost connecting with a mallard, but was quickly dispatched after two attacks from the resident Lapwings. They were not going to let it stay around and so it flew to the northern side out of harms way. A quick look of the approaching clouds had me heading back to the car as the rain started up again. 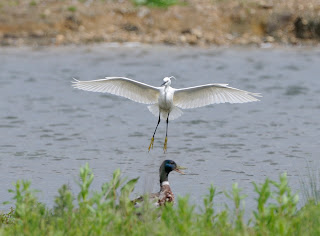 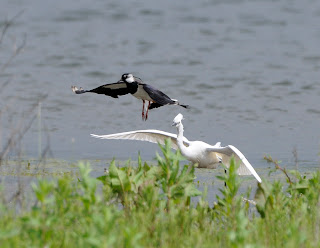