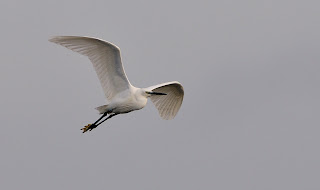 22nd November 2012.
The forecast was a brighter morning then rain moving in through the afternoon, well as usual that turned out to be fiction. I hadn't been at Bev's long before the clouds rolled in and the rain, albeit a few drops, started. The lone Little Egret was still present and the Gadwall numbers seemed to of swelled, I counted 26 with possibly a few more on site. The Lapwings were moving from the lake to the fields but unfortunately no Golden Plover. 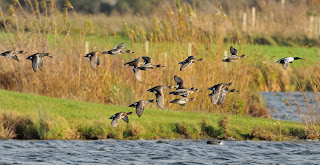 I noticed a few thrushes moving along the southern hedge line, and I noticed a few Redwings mixed in and I was lucky to get a record shot of one. The Fieldfare were always flying overhead though so no image there. 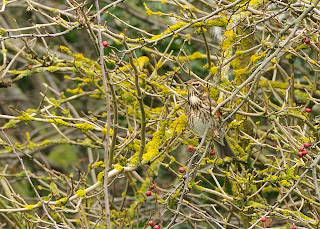 As the skies darkened, it wasn't even midday yet!, I focused on the still present flock of Common Snipe. The flock seemed large as before, but its hard to estimate the numbers when they take flight in different directions, and they are fast fliers too which adds to the task of counting. 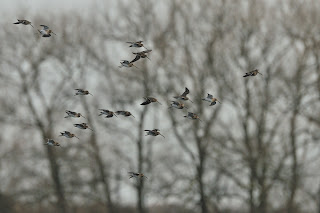 I took some time to carefully approach a few on the outer edge of the group, and was able to get pretty close, not one bit perturbed by careful stalking they even took to short spells of sleeping. Some of the Snipe were a lot richer in colour, and they were dotted anywhere there was a bit of cover. Still no sign of a Jack Snipe though, with the year mark getting closer I still hope to tick that off the list.

My best chance of an estimation of Snipe numbers was to take shots of them in flight and then count them, in the image below, this large group did not comprise all of the birds on site and staggeringly in this one image there is a total of 84 ...yes 84 Common Snipe. I think if I attempt any more Snipe counting I'll need a wide angle lens! 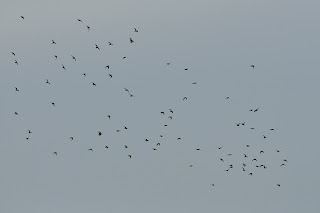