Another colourful addition at Bev's. 4th May 2012.

News came through of 3 Black necked grebes at Bev's, and so it was time to set off once again. Steve Blain text me to say they were there and so the short drive seemed to take twice as long! On arrival I was put onto them by Mark Thomas,many thanks for viewing through your scope, and then I got my gear and headed on site. Shortly thereafter Bev called me to see what was going on and I put him onto the grebes. Bev was working on his mobile hide and what a godsend that will be if the rain continues, and being mobile if the water levels increase any more it will double up as a ARK!

All 3 birds were staying in the south east corner and so I made my way along the south hedge line. They obviously liked this bay of the lake but more times the viewing ended like the images above, with them fleeing the Great crested grebes. The Great crested grebe continually sought them out wherever they were on the lake and regularly dispersed them away.

They would always move back to the same bay though, and over an hour later I had moved myself into a decent position and awaited their return. 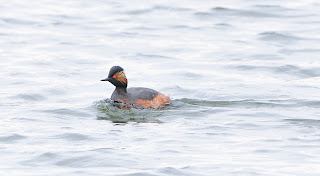 As you can see from the images they slowly moved in closer, always wary of the pair of Great crested grebes nearby. 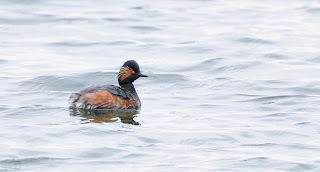 They then moved so close I could not see them against the bank in front of my position, I waited until they slowly moved along the waters edge and once again into view where I was able to bag some welcome images. 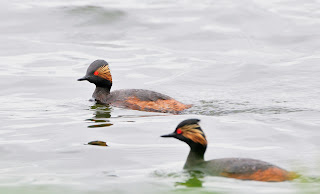 They were now in a sheltered spot and against a better backdrop and would of stayed there had it not been for the Great crested grebe that once again re-located them and made haste towards the 3 birds. 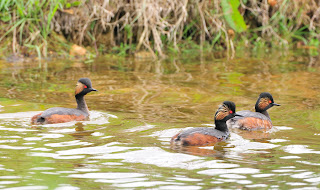 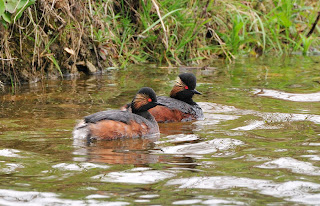 As depicted in the image below, all eyes were on the Great crested' heading their way, they then made a move for it and headed out into the centre of the lake, still pursued. I was glad with the images I had gotten of these stunning grebes and with darkening skies left for home once more.