A new month at "Mr Banks" Terns' out a new bird!

With a lot of species moving through Broom, not too far away, I headed up to Bev's, in the hope I may connect with something new. As before with the amount of water around, the sky was full of Swallows and Martins but on this occasion I think they were outnumbered by the Swifts. They were swooping past me within a couple of feet, over the lake and filling the skies, unfortunately for me the light was so bloody awful I was even going to attempt to try some flight shots! 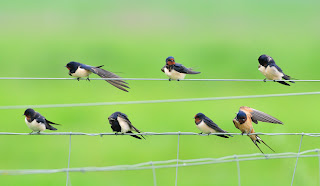 Four Shelducks graced the scrape but did not hang around for long. After busily feeding the Swallows rested up on the fence lines, a couple of birds displaying a reddish underside.

A single Dunlin was still present, 4 last time, busily feeding along the waters edge, and in the company of the Little ringed plovers and Ringed plovers. I noticed some of the blokes from the Lodge RSPB viewing from the gate and thinking Steve Blain would be amongst them, let him know of the Dunlin. Sure enough he replied that there were 3 Arctic terns there now!

I had been busy watching the Dunlin and I hadn't spent much time watching the terns,only now and again
in the hope of a passing Black tern, I frantically tried to locate one of the Arctics' through the bins and finally nailed them with a couple of record shots too. 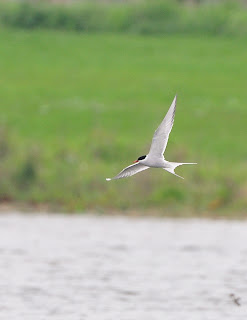 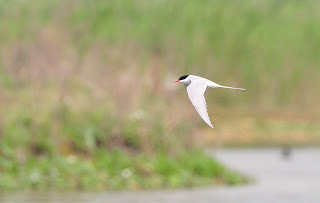 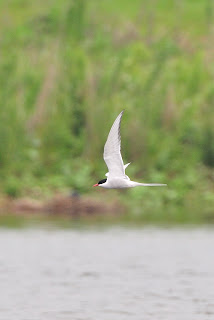